One of my past students, Henry, noted that I needed more colours to draw things on the whiteboard. That got me thinking if something like a Raspberry Pi could be used as a cheap smart whiteboard, along with a projector. It turns out that Johnny Lee has already done this using a Wiimote and an infrared pen.

So I've bought a Wiimote and built two IR pens using IR leds I've bought from Jaycar: one is a 1.5V rechargable AAA battery wired directly to the LED and switch, the other has a 39 ohm dropping resistor and two AA batteries. 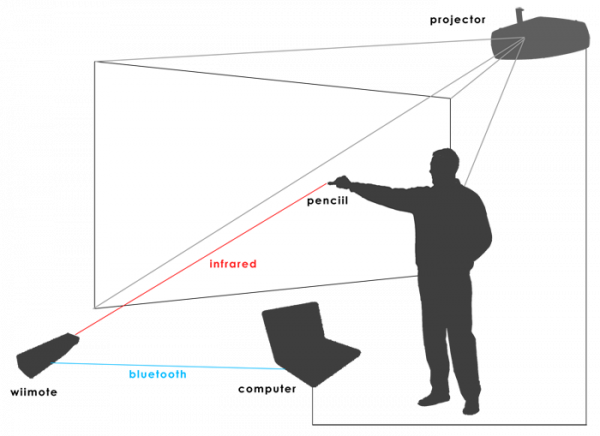 I've got the software installed on my laptop: python whiteboard and Open Sankoré, along with a Bluetooth dongle. I've just tried it all out at work in a spare classroom.

Well, I'm disappointed. The IR led on both remotes is too weak: I have to point the IR led directly at the Wiimote; what I need is to be able to point at the screen and have the IR light either reflect off the screen or have an IR LED with a wide angle of dispersion so that the light will reach the Wiimote. Looks like I have to either find a brighter LED or buy a commercial IR pen.

However, I've played with Open Sankoré and I really like it. They really have thought through what a teacher is going to need. Anything you draw is saved immediately and dated, and you can export to PDF. You can also record the desktop along with audio from a mic, if you need to capture drawings as they change. You can import SVG shapes and icons (good for me, I teach networking), and there are some excellent interactive apps built in: Google Maps and Open Street maps, timers, periodic table, calculator, molecule shapes etc. The main audience seems to be primary and secondary schools, but I'd be happy to use it.

If I can get a working IR pen!