I'm making my final exit from the OzTiVo community by relinquishing ownership and control of www.oztivo.net. The community has been in existence for about 15 years now, and we have seen a huge change in the video devices available to consumers and the delivery models for video.

I knew Andrew Tridgell (“tridge”) when I lived in Canberra in the late 1990s; he is one of the few geniuses that I have met. At this time, Australians had 625-line PAL analogue TV and VHS video recorders.

Tridge imported a Series 1 TiVo from the states, knowing full-well that it wouldn't work here in Australia (NTSC vs PAL), but that didn't deter him. After some weeks of register banging on the device, he was able to get it to record and play back PAL signals. I saw his talk at AOSS 3 in Canberra in 2001, and I knew that I had to get one.

I moved up to the Gold Coast in 2001 and I got my first S1 TiVo soon after. I can't describe how amazing the TiVo concept was at the time: the ability to record TV shows by name and not by date/time, to record and play back at the same time, the ability to quickly skip ads etc. There's been a working TiVo in my house ever since!

One big problem with the initial TiVo work was the lack of good TV guide data. Tridge had done some initial work on generating guide data. I took his work and wrote a much larger system to scrape TV guide websites and generate the guide 'slices' that the TiVo needs. At the same time, I set up the OzTiVo mailing list so that we could form a community to help each other out.

The community took off in a big way and it turned into the OzTiVo community. I expanded my guide data system so that it produced data for all the states and regions in Australia. I improved the TiVo mothership emulator from TiVoCanada so that the OzTiVos could download the guide slides that my system was generating. TiVo Ed and I hacked the TiVo software to know about the Australian mothership and to make it easy to configure the system here.

There were countless other people involved in the community: petestrash, TiVo Ed, Ron Davis, Dennis Boylan, Keith Wilkinson, Ross Irvine, Darren King etc. I really should put in about 40 names here, that's how many people have been involved in various ways. At the peak of operation we had over 1,200 OzTiVos phoning home each week. Then, when I modified the system to output XML data, we had up to 20,000 XML devices downloading data each week. In 2005 I wrote a paper for LinuxConf which described our community and the system that we had set up. 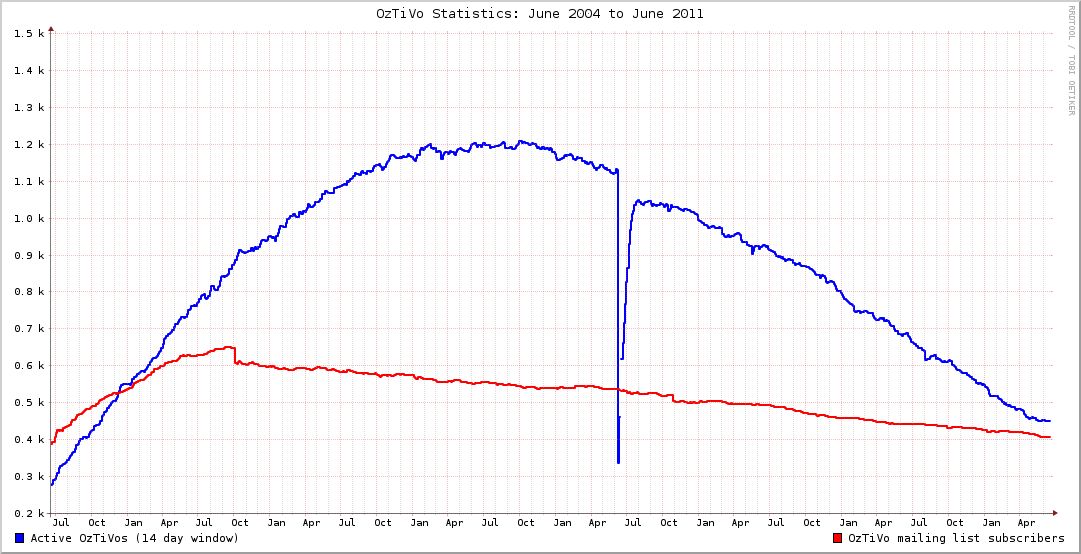 Around the peak of operation, I started to get burned out and Kevin Lentin kindly stepped in to take over most of the development and maintenance of the system. Kevin looked after it for four or five years (thanks Kevin!), but he too got burned out. Since Kevin left, the OzTiVo system has been looking after itself like the Mary Celeste. I've had to go in a few times to fix up the web scrapers, and Ross Irvine has had to fix up the channel configuration a few times.

At the end of 2015, we are down to about 80 S1 OzTiVos left in operation and only 1,500 or so XML users. Most people either have real HD TiVos, Foxtel, a Telstra T-Box, or download their programs from NetFlix, Stan etc. Or they watch TV on smart TVs that download the guide data over FreeView. There's no great need for the guide data system any more.

I've not done any real OzTiVo work for about five or six years now, so it's time to finally bow out. Hopefully we can find someone to take over the (minimal) care and feeding of the OzTiVo web site. It was immense fun, crazy hard work at times, but I found the sense of community amazing.