The Design and Implementation of the 4.3 BSD Unix Operating System 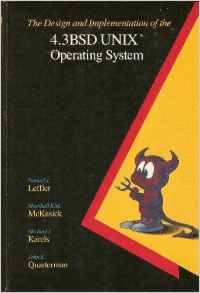 This book covers the 4BSD branch of Unix development, and 4.3BSD in great depth. It has its own entry (Devil Book) in The Jargon File.

Amazon says: BSD stands for “Berkeley Software Distribution”. It is the name of distributions of source code from the University of California, Berkeley, which were originally extensions to AT&T's Research UNIX® operating system. Several open source operating system projects are based on a release of this source code known as 4.4BSD-Lite. In addition, they comprise a number of packages from other Open Source projects, including notably the GNU project. The overall operating system comprises: The BSD kernel, which handles process scheduling, memory management, symmetric multi-processing (SMP), device drivers, etc. Unlike the Linux kernel, there are several different BSD kernels with differing capabilities. The C library, the base API for the system. The BSD C library is based on code from Berkeley, not the GNU project. Utilities such as shells, file utilities, compilers and linkers. Some of the utilities are derived from the GNU project, others are not. The X Window system, which handles graphical display. The X Window system used in most versions of BSD is maintained by the X.Org project. Many other programs and utilities. Delve deep in to the internals of BSD with “The Design and Implementation of the 4.3 BSD Unix Operating System”.